Pierre Schryer, Martin Nolan and Adam Dobres TRIO
It is a rare and very special occasion when these three fine musicians get together to play music. Pierre makes a yearly trip from Ontario to BC near Adam’s home on Pender Island, while Martin comes every 2 years from Ireland to visit the West Coast. Although the time between collaborations is long, when these exceptional artists do unite it is a high quality and magical experience.
“Three exceptional artists from three rich cultural traditions - a high energy performance that you won’t soon forget.”


Pierre Schryer is one of Canada’ leading traditional fiddlers. He has established himself as a gem on the music scene among fans and fellow musicians and is a JUNO nominee and Canadian Folk Music nominee. For over two decades Pierre has been touring across North America, the UK and Ireland headlining festivals and captivating audiences with his musical finesse, genuine warmth, and stunning technical ability in any style from Irish, Scottish and Québecois, to Canadian, American, and Swing. Over the last decade, Pierre has released six solo recordings on his own label, New Canadian Records. Pierre has shared the stage with musicians including Dermot Byrne, Jane Bunnet, the Barra MacNeils, Liz Carroll, Tony McManus, Ashley MacIsaac, J.P.Cormier, Matapat, Club Carrefour, La Bottine Souriante, Altan, Paddy Keanan, Kevin Burke, Old Blind Dogs and more. In addition to his performance talents, Pierre is an accomplished watercolour artist, luthier and producer. He performs on one of his own violins built in 1994, and is the artistic director of the Canadian Celtic Celebration,
a 3- day festival presented each June in Thunder Bay.


Adam Dobres is a highly accomplished guitarist with a natural ability to embody many styles of music. He is equally at home with Bluegrass, Celtic, Jazz, Country, Folk, Old Time, Rock and Blues. His love of the electric and acoustic guitar has taken him around the globe, performing throughout North America, Europe, Australia, and New Zealand. Adam was a member of the well known Old Time group, Outlaw Social and is known to frequently team up with BC fiddler Daniel Lapp and Ontario fiddler Pierre Schryer. Adam has also recorded and toured with Grammy Nominee Toni Childs including an Australian tour were they opened for the legendary Jackson Brown. Currently Adam is part of The Ruth Moody Band who recently opened for Mark Knopfler on 13 shows in Europe, Holland and at the Royal Albert Hall in London, UK. Adam is a highly sought after sensitive musician and a warm gracious colleague which has presented him the occasion to play with countless musicians live and on recordings including Ridley Bent, Kendel Carson and Dustin Bentall. In between his busy touring schedule Adam has been composing and recording his own original music.
Ontario, CA Dublin, Ireland British Columbia, CA 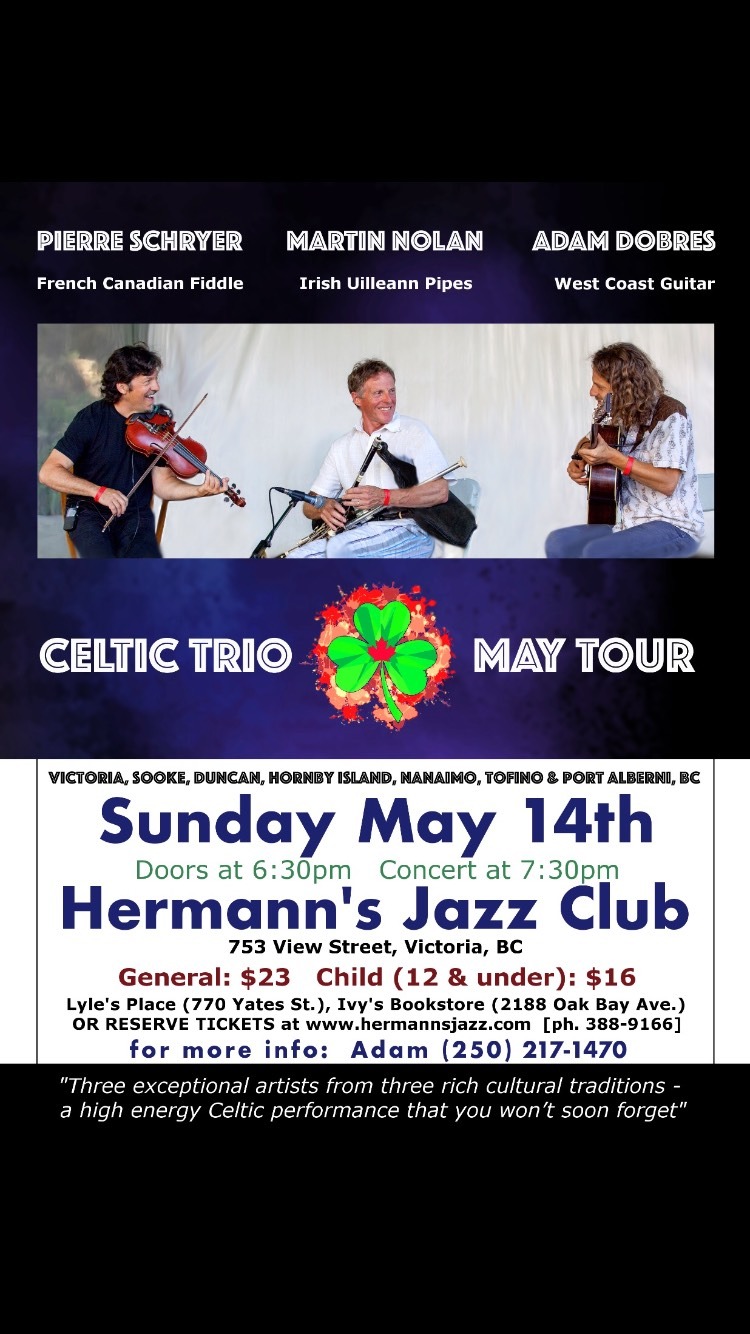