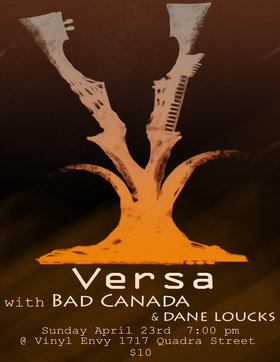 Dane Loucks (Victoria, BC) will be performing a wild solo set to open the night!
(of local Victoria cinematic fuzz rock band, The Purrverts!)

and Versa (Victoria, BC)
Formed in 2006 by Matthew Dolmage, Kevin Grady, Hollas Longton, Benjamin Rancourt, and Anthony Theocharis, who met at the University of Victoria School of Music. The performing post-rock band now consists of founding members Matthew, Ben, and Anthony, with Michelle Edwards on trumpet and Janelle Wrona on keyboards, and percussion. Hollas continues to write from his foreign posting in Holland.
https://versaversa.bandcamp.com/music

Hope to see you there

Post/Prog rock band blowing minds in Victoria since 2006. more info
Submit info on this show to our admins