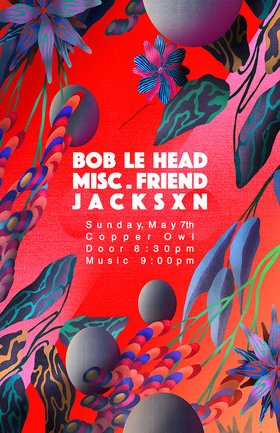 Bob Le Head ~ Lofi Hiphop
(Victoria, B.C.)
Bob Le Head is a talented local producer who has been become a prominent member in the genre of Lofi Hiphop. Having released multiple beat tapes and singles, Bob has made himself known for chill tracks with subtle intricacy. However don’t let it be mistaken, Bob Le Head will be sure to keep you up and moving with bumping kicks and catching melodies!
https://soundcloud.com/bob-le-head

Misc. Friend ~ Hiphop / Experimental
(Victoria, B.C.)
Misc. Friend is an amazing experimental producer who consistently is pushing the bounds of what his music contains. With influences from Experimental, lofi, dance, ambient and Trap music, Misc. Friend continues to create unique tracks through the use of his own field recordings and developed sounds. Live, Misc. Friend isn’t afraid to switch it up and create tracks on the fly as well. A part of Top Cats Entertainment, Misc. Friend has released one album and countless tracks!
https://soundcloud.com/miscfriend

Jacksxn ~ lofi hiphop / RnB
(Victoria, B.C.)
Jacksxn is a relatively new local producer who has found success in his blend of Lofi Hiphop, Jazz, Soul and RnB. Having already released two beat tapes, Jacksxn continues to carve out his place in the music scene. Bringing live drums into his performance, Jacksxn strives to bring his production to life like never heard before!
https://soundcloud.com/ogjacksxn

See you there space cowboy….