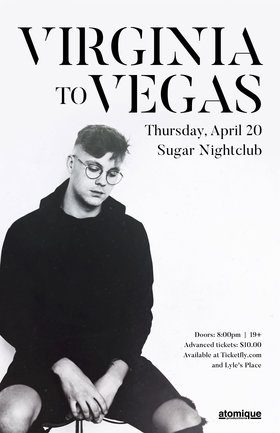 Music: Pop / Rock / Indie
Virginia To Vegas is Derik Baker, the 24 year old wunderkind hailing from small-town Ontario. Raised on his parents record collection and cutting his teeth at a young age writing songs for a variety of pop artists, Derik was discovered by Canadian indie label Wax Records in 2013.

Upon releasing his debut single “We Are Stars ft Alyssa Reid” in January of 2014, Derik’s music instantly connected with fans across Canada, topping radio charts and becoming Gold certified in a mere 12 weeks. This whirlwind year has seen him travel the continent, shooting his music videos in Las Vegas and New York, sharing the arena stage with Alyssa Reid and Hedley, and performing on the 2014 MMVA’s. Following this early success with his debut EP, Virginia To Vegas has arrived and is ready to shoot for the stars.