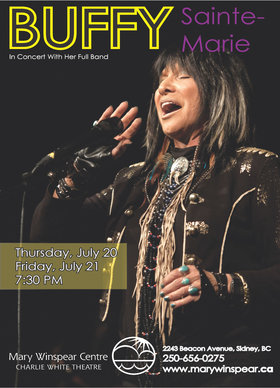 Buffy Sainte-Marie’s bold new album, Power in the Blood is a follow-up to 2008’s acclaimed Running for the Drum and only her fourth studio release in more than 20 years. Although just because you don’t hear from her for long stretches doesn’t mean she's not playing. Quite the opposite. Sainte-Marie’s creativity is always in motion, and her passport's always in hand, globetrotting for lectures and performances with her high-octane backing band. She records only when she feels like touring, and currently Sainte-Marie is taking center stage around the world, including North America, Europe and Australia.

Buffy Sainte-Marie was a graduating college senior in 1962 and hit the ground running in the early the Sixties, after the beatniks and before the hippies. All alone she toured North America's colleges, reservations and concert halls, meeting both huge acclaim and huge misperception from audiences and record companies who expected Pocahontas in frin... more info