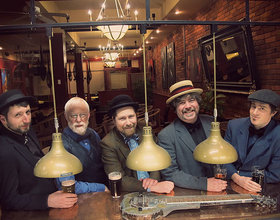 Victoria's Prohibition Era Dance Band is teaming up with Vancouver's Early Blues String Band for a night not to be missed.


The Burying Ground is an upbeat blues string band that brings the fire of punk to the technical prowess and distinct sounds of such early blues, country and jazz masters as Blind Blake, Bessie Smith, Gary Davis, Memphis Minnie, Big Bill Broonzy, Jimmie Rodgers and many others.

If you’ve ever woken up in the morning and your first thought was a song, you’ll understand something of the devotional quality that drives their music. Woody’s complex blues guitar and rags are punctuated and raised high by Devora’s tightly syncopated washboard, with playful rolls and staccato jumps and stops.