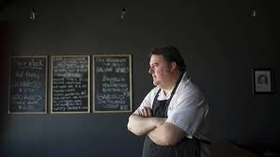 Music: Jazz / Blues
I've known Terry for close to 30 years. He's one of the most gifted people I've ever met. His ability to focus on one discipline and master it within a few months to a year is absolutely astounding. Though not well known compared to his contemporaries, Terry was always a towering figure in the New York jazz community of the late 90's. Not only was he one of the best saxophone players in the world at the time, he was definitely the best saxophone repairman of his day. His regular clients included Michael Brecker, Joshua Redman, Kenny Garrett, Mark Turner, and Joe Lovano among dozens of others, basically all the top saxophone players in NYC at the time. I've seen him beat chess masters online, become a scratch golfer and have the co-principal flutist of the NY Philharmonic asking him for tips on how to improve her sound, all after a few months of practice. Regrettably, Terry stopped playing saxophone in 2008 to pursue a career as a chef, opening two successful pizza places in the Vancouver area before moving out to Abbotsford with his wife, Heather, to work as a chef at a care home. He lives a quiet life and I until last week I hadn't seen him in years. His influence on my life as a musician is massive, I was and still am always in awe of him. Well today Terry is in trouble. He has cancer of the left kidney. He's scheduled to have it removed on Feb 27th. I'm organizing a benefit with some of his favorite players at Hermann's next Monday, Feb 27 at 7:30. The all star band will include 2017 Juno award winner, Brad Turner on piano, Order of Canada recipient Phil Dwyer on saxophone, one of Canada's busiest jazz drummers, Jesse Cahill on drums and myself on bass.
Cover charge is $25. All proceeds go to Terry. At 44 years old, Terry has a lot to give the world. Please support this brilliant man in his time of need.