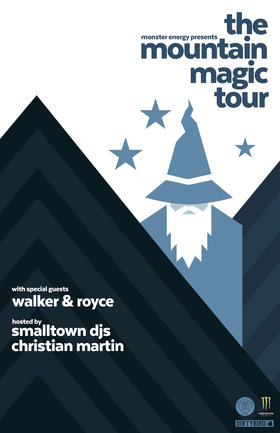 Music: Electronic / DJ
WALKER & ROYCE
Everybody's Doing It...
CHRISTIAN MARTIN
Since 1995, Christian Martin has been exploring electronic music from one end of the earth to the other; from full-moon parties in the deserts of California to the thumping, dark corners of the London club scene. Christian followed his love for spleen-rattling bass to San Francisco in 2000, where he met up with the now legendary dirtybird crew. The dirtybird BBQ was the brainchild of the four original members " Christian & his brother Justin Martin, and friends Claude VonStroke and Worthy. They had a personal mission to change the landscape of San Francisco house music by throwing an epic free party in the park, based on their new signature sound.
Read more: liaisonartists.com/artist/christian-martin
SMALLTOWN DJS
The Smalltown sound is fun bass-heavy house music, combining the spirit of Canada's outdoor electronic music festivals such as Shambhala & Bass Coast, with the sound they cultivated at the legendary Hifi Club in Calgary (which they own and operate). The boys have released music most recently on various labels including Fool's Gold, Sweat It Out!, Mad Decent, Main Course, and more.
They have played shows across the globe from the Mad Decent Block and Boat Parties, to Fabric in London & U-Hall in DC, and Bestival in Toronto. With highlights that include appearances on Diplo & Claude Vonstroke's radio shows, a one-year stint in Las Vegas, the yearly Mountain Magic Tour with Christian Martin (of Dirtybird) and friends, and their collaboration with Shad & Wax Romeo "Boom Ha" being featured in the HBO show "Girls".
In 2016 they have new music on Crispy Crust, Sweat It Out! and Punks, and a healthy tour schedule to support the latest releases, as they continue to push their forward thinking sound and positive message to the dance music masses.
DANIELE MEREU
Born and raised in Turin (Club to Club), Italy, Daniele grew up with the sound of 90s acid house and London UK style and quickly moved to techno following inspiration by gurus such as Swen Vath, Richie Hawtin, Riccardo Villalobos and Dubfire. After a successful set last year at Rifflandia 2015 (Wolf/Sheep) playing tracks from his favorite DJs/producers such as Sasha and Trevino, Daniele is back for another electric-progressive set.