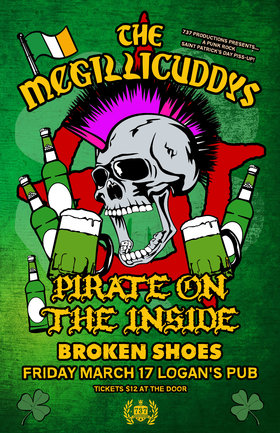 Event Archive - The McGillicuddys, Pirate On The Inside, Broken Shoes

Music: Folk / Celtic / Latin / World, Punk / Metal / Hardcore
737 Productions is proud to present a St. Patrick's Day party on a Friday night this year at everyone's favourite local watering hole. Win, win situation if I do say so myself! And of course this will be headlined by everyone's favourite local Celtic punks, The McGillicuddys who probably need no introduction. They will be playing a set of originals, mixed with some punked up versions of traditional Celtic songs, with a few covers of punk classics such as Cock Sparrer, The Pogues, and The Clash thrown in for good measure! These guys know and love St. Patrick's Day as well as anyone.

Coming down from Nanaimo for everyone's entertainment will be folk punk duo Pirate On The Inside. These guys feature guitar and stand up bass and are influenced by everyone from Old Crow Medicine Show to Propagandhi!

Opening up the evening will be solo folk punker Broken Shoes. This guy has played in several local punk bands such as Blood Nasty and Azotobacter to name a couple. But he has never been held back or restrained by specifically one genre or style.

12 bucks at the door night of show! But it is St. Patrick's Day, on a Friday at Logan's, so DON'T show up late!

Pirate On The Inside (Political Folk Punk)

We are a political folk punk duo consisting of acoustic guitar and stand-up bass from Vancouver Island, BC, Canada. We play songs for change, for encouragement and for fun. Mostly politically driven songs with a few stories here and there. more info
Audio: Candle Wax Stuffed In Your Ears
Submit info on this show to our admins