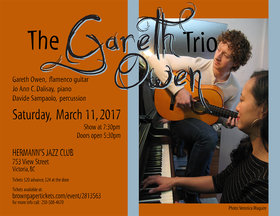 The combination of these three artists is electric!! Gareth, Jo Ann and Davide collaborate to produce rhythm and sounds that take you far and away.
5:30 Doors; 7:30 Show.
Gareth Owen is a world-class flamenco guitarist based in Victoria, B.C. He has shared the stage with many international flamenco greats including Jesus Álvarez, María Bermúdez, Domingo Ortega and Luis de la Tota. He has been a guest artist in the Toronto International Flamenco Festival, Vancouver International Flamenco Festival, Calgary International Flamenco Festival, and the Dawson City Music Festival. Large-scale productions include Café de Chinitas in Vancouver, and Recuerdos and Pasajes in Victoria. Gareth is the son of Veronica Maguire and the late Harry Owen of Alma de España. He has recorded two albums, “Gareth Owen Flamenco Guitar” and “El Cobre” with Antonio de Jerez.

Jo Ann C. Dalisay is the owner/director of Celesta Piano Studio. She received her Bachelor’s Degree in Music (piano performance) from Mount Allison University and her Master’s Degree in Music (piano performance) from the University of Victoria. Jo Ann was honoured to have performed with the University of Victoria Student Orchestra under the baton of the late Janos Sandor. Under the direction of Christopher Butterfield, she also performed contemporary chamber music at UVic’s Sonic Lab Concerts. As a soloist, Jo Ann has performed across the country. She has played and premiered works of several new composers such as Nicole Burgess, Ian de Hoog, Alisdair Zacks, John Cole, Andriy Talpash and Benjamin Keen. Jo Ann has also collaborated with the Alma de España Flamenco Company in concerts combining Classical Spanish repertoire and traditional Flamenco music and dance.

For parties of 6 or more, you can reserve a table at Hermann's: email [email protected]

Gareth is one of the few guitarists born into a North American flamenco family specializing in "flamenco puro" (unadulterated flamenco). His unique experience brings out a rare passion in his playing. He is one of a small number of accomplished flamenco guitar masters in North America. Don't miss him! To sample his music: http://www.flamencoguita... more info
Submit info on this show to our admins