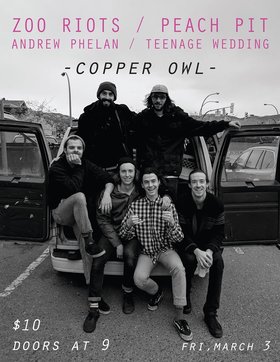 With a loud and frenzied live show that dips heavily into the melodic and mysterious, Zoo Riots’ competing influences of psychedelia, indie, blues, and soul merge to full effect.

Intricate vocal and guitar harmonies, thundering dual percussion, and groove heavy bass lines are key features of their ever expanding sound that aims to keep audiences guessing as much as dancing.

With lyrics rooted in high school heartbreak and self deprecation, Peach Pit spin stories of backstabbing best friends and drug addicted tour guides. Having the dance moves of an epileptic headbanger and the body of a 14 year old girl, Neil brings a unique energy to their live shows while the rest of the band does their best to keep it weird.

"Andrew Phelan has a sleeper of a voice-the kind that can lull one moment, and knock you back with its power the next" - Sarah Fawcet, Red On Black Music.

Australian born, Vancouver based singer Andrew Phelan writes close to the chest, and this heartfelt approach to songwriting quickly cut a path in the Canadian music scene after he formed Folk band The River and The Road with Canadian musicians in 2011. The past 5 years have included multiple cross Canada tours, shows across Japan and Australia, a nomination for breakthrough album of the year at the Canadian Folk Music Awards, and supporting such artists as Sam Roberts, The Arkells, Shakey Graves, and John Paul White of Civil Wars.