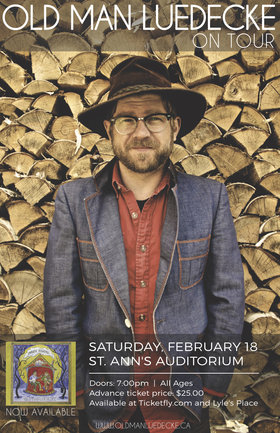 Music: Country / Bluegrass / Rockabilly, Folk / Celtic / Latin / World
You can hear the listening on Old Man Luedecke’s new album, Domestic Eccentric. You can hear the cabin in the snowy Nova Scotia woods where it was recorded. On their third collaboration, you can hear the beautiful conversation between Old Man Luedecke and Tim O’Brien, two like-minded artists in love with folk and roots music, playing at the height of their powers.

"You can't fake a work of heart," Luedecke sings in "The Girl in the Pearl Earring," the second song on Domestic Eccentric, and the assured confidence of that line, the assertion of a straightforward truth, is the guiding principle behind the entire album. Old Man Luedecke is the real thing, a modern-day people's poet and traveling bard and balladeer. He’s played around the world to a loving and increasing fan base, and won two Juno awards in the process. Tim O’Brien is a multiple Grammy Award-winning roots multi-instrumentalist whose solo work and collaborations have made him one of the most respected American players working today. The two last worked together on Luedecke’s 2012 release, Tender is the Night, which was nominated for a JUNO Award and won Album of the Year at the East Coast Music Awards.

Old Man Luedecke, is one of Canada’s best loved and most intriguing roots singer-songwriters. “An original, he is a musical singularity to be savoured and shared”, says the Vancouver Folk Festival. His memorable melodies, poetic sense and easy charisma appeal to a new generation and anyone searching for new growth from old roots. Old Man Lu... more info
Submit info on this show to our admins