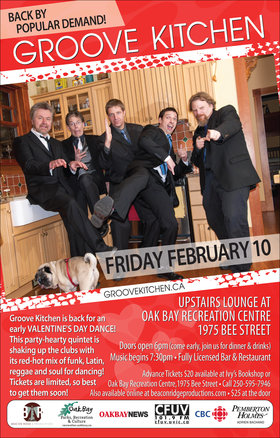 Music: Funk / R&B, Pop / Rock / Indie, Tribute / Cover
Groove Kitchen was originally formed in 2011 by guitarist/vocalist Dave Anderson and keyboardist Adrian Chamberlain. Their ambition was to create a funk band featuring top Victoria musicians with an emphasis on tight arrangements. Above all, they wanted to create a party band that dishes out a red-hot mix of soul, funk and Latin music. Groove Kitchen’s sizzling line up also features Pedro Arbour on drums and vocals, Steve Moyer on bass and vocals and Eric Hughes on saxophones.

Over the last four years, Groove Kitchen has evolved into one of Victoria’s most popular musical acts, with regular sold out shows at Hermann’s Jazz Club and many performances at clubs, halls, special events and festivals. Performance highlights include the Victoria International Jazz Festival, the Blues Bash, the Saanich Fair and various community events.
The group specializes in reinventions of funk and soul music, both old and contemporary, with a nod to Latin music as well. Crowds love to dance to such classic funk tunes as James Brown’s Soul Power, Average White Band’s Pick Up the Pieces and I Wish by Stevie Wonder.

Groove Kitchen also delves into contemporary material such as Hot in Here by Nelly, Uptown Funk by Bruno Mars and Love Never Felt so Good by Justin Timberlake/Michael Jackson. Also popular are their reinterpretations of such tunes as Bust a Move by Young MC and Rapper’s Delight by the Sugarhill Gang. Their Latin material (both Anderson and drummer/vocal Pedro Arbour are fluent in Spanish and Portuguese ) includes El Cuarto de Tula and Mas Que Nada.

Please note The Upstairs Lounge is a licensed restaurant and bar, doors open at 6 pm for dinner service, the band starts playing at 7:30 pm

The Groove Kitchen knows how to help you have a good time! We play music that makes you want to shake what the good Lord gave ya, have a few laughs and get tha funk out! This party-hearty crew really delivers the goods – Funk and Latin from classic tunes by Maceo Parker, Marvin Gaye, Stevie Wonder and Buena Vista Social Club to hip hop and ne... more info
Videos: