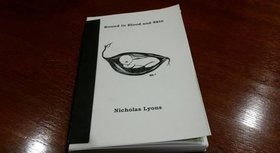 
Nicholas Lyons has been a freelance writer for over ten years. His work has appeared in publications such as Exclaim!, Monday Magazine, Rifflandia Magazine, and Beatroute Magazine. Nick was the Founder and Editor in Chief of analogue magazine from December of 2013 to February of 2016. Bound in Blood and Skin is Nick's first novel.

Nicholas Lyons started work on Bound in Blood and Skin ten years ago, shortly after graduating with distinction in English from the University of Calgary. The first two chapters came to him in a day and he was immediately very excited by their potential. He has had the good fortune, throughout these five years to have former professor, now friend, A. Mary Murphy as a mentor. Mary, a published poet, professional writing consultant and recipient of several writing grants, has helped him at every stage of the writing process, offering indispensable advice and critique. When he read the first two chapters to her, she said, confidently, that they were the seeds of what would be his first novel; as always, she was righ

A strange and complex novel has indeed grown from the seeds of the first chapters. The novel might best be described as magical realism. Weighing in at approximately 100, 000 words, the novel is about a young writer who struggles to come to terms with his main character, the mystical bastard, butcher son of Louis Riel. This character reveals himself slowly to his creator through conversations, historical documents and, ultimately, the author’s own imagination. As the novel progresses, the line between author and subject dissolves, forcing the reader to question who made who.

This novel is an homage to disparate literary and musical traditions. At the outset of the novel’s composition, I was at the height of my Thomas Wolfe obsession (the first chapters composed shortly after a trip to North Carolina to sit at his grave): the novel’s very title bears reference to one of his lesser known works. There are many other influences too. The novel borrows styles and themes from The Gospel of John, Salman Rushdie’s Midnight’s Children and Reinaldo Arena’s Singing From the Well. There are poets and musicians here too: Rainer Maria Rilke (as translated by Stephen Mitchell) joins Walt Whitman, Carey Mercer, Edgar Lee Masters, Bob Dylan, William Blake, Dan Bejar and Jack Kerouac (Mexico City Blues Kerouac, that is) all lend their voices to Milk and Honey’s strange, drunken choir.

Originally from Kelowna, British Columbia, he currently resides in Victoria. He is a graduate in creative writing from the University of Victoria. Martens has also served on the editorial board of The Malahat Review.

Tom Fowler is a fixture on Victoria's Spoken Word Poetry scene. He is widely regarded as Victoria's best living poet.

Pam Stewart's beautiful poetry has resounded from the walls of wherever Tongues of Fires finds a home. She is the winner of many a spoken word poetry contest.

Garth Martens won the 2011 Bronwen Wallace Award for Emerging Writers. His first book Prologue for the Age of Consequence (House of Anansi Press) was a Finalist for the 2014 Governor General's Literary Award in Poetry. His poems have appeared in Poetry Ireland Review, Hazlitt, This Magazine, Vallum, Fiddlehead, Grain Magazine, Prism International, ... more info

Pam is a writer, spoken word poet, event producer and workshop facilitator. She finds it easier being vulnerable on stage than in real life, and tries to make each performance a little more honest than the last. Her writing explores what it's like being one type of woman in a very distracted world. To her, writing is the fastest route to knowin... more info
Submit info on this show to our admins