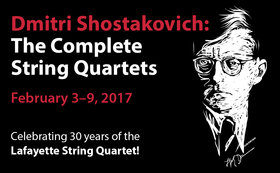 Music: Classical
The Lafayette Quartet celebrates its 30th anniversary with the complete cycle of Shostakovich's 15 String Quartets. The cycle will be presented in 5 concerts along with pre-concert talks and lectures by visiting scholars.

Journey through Shostakovich’s life as experienced through his string quartets — from the optimism of the first to
the desolation and hopelessness of his final quartet. This cycle documents Shostakovich’s creative life and spans
his compositional career from the late 1930s until his death in 1975. The Lafayette String Quartet will share its
special heritage with these works as received from their mentor, violinist Rostislav Dubinsky, who knew and worked closely with Shostakovich.

Since their initial season in Detroit in 1984, the Lafayette Quartet has played to critical acclaim and enthusiastic audiences throughout Europe and North America. Early in their career, they garnered major competition prizes (e.g., the Grand Prize at the Fischoff National Chamber Music Competition), and embarked on extensive study with chamber ... more info
Submit info on this show to our admins