The Party on High Street, The Leg-Up Program, Grapefruit is Impossible

The Party on High Street, The Leg-Up Program, Grapefruit is Impossible

Soulful Indie LeftCoast from Victoria BC
Available for Shows/Gigs

THURSDAY, JANUARY 19th - DISTRIKT NIGHTCLUB
Live on a Starry Night in Victoria, BC...

The Party on High Street and The Leg-Up Program with guests Grapefruit is Impossible present an evening of Soul, Funk, Hip Hop, Rnb, and some Psychedelic FunkFolkcore!!!

Live music soothes the soul and this night will be something to remember as these three amazing local bands welcome you to their first shows of 2017. Bring your dancing shoes because the sheer number of talented musicians on stage is enough to light up any dance floor. Rumour has it, they may even unite the clans for a final number...

About THE PARTY ON HIGH STREET:
"If George Clinton and Tom Waits had a love child, raised it on a music commune and then sent it to folk festival summer camp.."
Pretty much sums it up. Here's more tho...
The Party On High Street has worked tirelessly to bring it's signature feel-good funk jams to the people! We are a lively dance-inducing mix of funk, folk and jazz fuelled rockn' roll, joyfully delivered and presented like a funbomb waiting to make you jive. Our band sings of peculiar youthful enchantments, weird love, and some of the odder aspects of life. Touring and playing live shows has fed our spirits and stroked our souls since the beginning.

About THE LEG-UP PROGRAM:
“15-Piece Powerhouse, The Leg-Up Program Are A Phenomenal, Ensemble Of Amazingness From Victoria, BC.”
Caleb Hart – Tasman Jude
Sounds epic! Here's more...
Originating in Victoria, BC, the awesome 17-piece collective of funk, soul, hip hop, r&b musicians that make up The Leg-Up Program are a force to be reckoned with! At times, they are a soul band with raspy lead vocals and beautifully sculpted harmonies; at times, they are a funk band with wild horn lines and groovy bass and drums; at times they are a hip hop group with catchy hooks and solid beats; and at times, they are sweet and sultry, keeping the audience fully engaged with the slowest of ballads. Amongst it all, is a group of people who simply love to make music and inspire others to get up and dance and become a part of all the fun! Each one is a talented musician and their original material stays with you like any hit song. It's safe to say, this band has it all. This instant party band works hard and it shows.

About Grapefruit is Impossible:
"You GOTTA SEE THESE GUYS!!!"
Enticing. Here's more...
An ORIGINAL hip hop group, trying to bring the LIVE GROOVES to BUST A MOVE to... (note the bolded words).

Need we say more?!
The show is $8.00 in advance and $10 at the door and money goes to the bands and musicians who are putting on this show so you know it'll be great and your support is invaluable!!!!!|
(The artwork featured for this event is a respect-filled adaptation of an original piece by Duncan Sham).

See you there on that Starry Night!!! 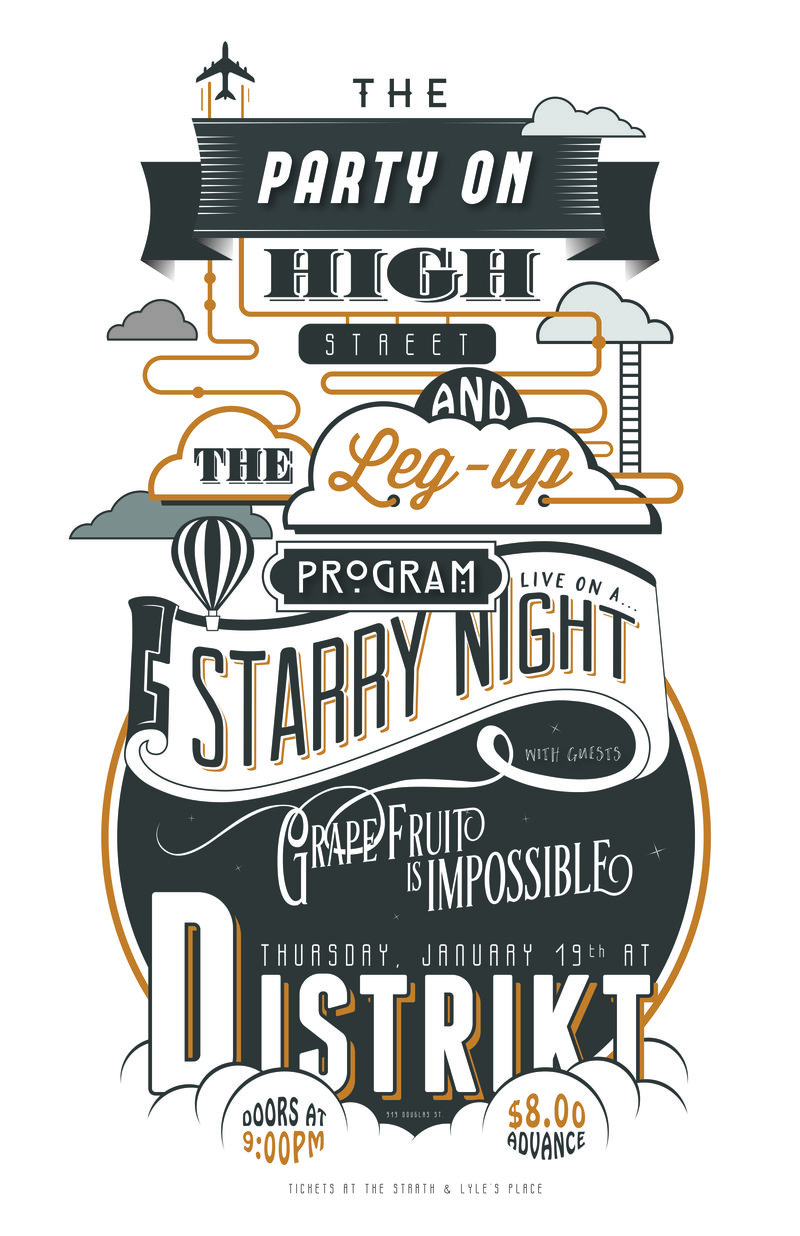