This will be an evening to remember with lots of swinging hot jazz and romantic,...

For over three generations, Allison Piano has been servicing...
2328 Government Street Victoria BC
Open / Operational

This will be an evening to remember with lots of swinging hot jazz and romantic, rich ballads with three exceptional musicians.


Phil Dwyer is in the top of his field with his mastering of the saxophone and piano. His jazz versions of many standards are outstanding. Houston Person, one of the world's finest tenor players, once said after he played at the Port Theatre for us that "there was definatly fire in the belly" with Phil's playing. He was impressed. Sean Drabitt is a versatile bass man who keeps busy in the Victoria area with anybody that needs him. Sean introduced us to Seattle jazz drummer Matt Jorgenson. The two of them will provide a sizzling rhythm section for Phil to play into and us to keep up to. We will ride the wave and take it as it comes....knowing that living an exciting life means opening doors to the unknown.

I hope you can join us and all that Jazz! -Catherine Allison

On Dec. 30, 2013 Phil Dwyer was appointed as a Member of the Order Of Canada. He was cited for “his contributions to jazz as a performer, composer and producer, and for increasing access to music education in his community.” In January 2015 he was recognized by the Royal Conservatory of Music as an Honourary Fellow. These distinctions come as Dwyer looks back at an illustrious thirty year career which has crossed stylistic and geographic borders and has included collaborations with a storied roster of great musical artists, including appearances on ten Juno Award winning recordings.

Since 2014, while continuing to perform and record, Phil has been studying law at the University of New Brunswick. He recently spent the summer in Toronto, participating as a summer student in a pilot project with social services agency Sound Times, and Legal Aid Ontario.

"I've been a working professional musician for fifty years. I've played with a lot of the worlds greatest musicians and I can honestly say I've never known a better musician than Phil Dwyer. He's a saxophonist, pianist, composer, arranger, producer and teacher and he does all these things at the highest possible level. He is a constant inspiration to everyone who knows him". - Don Thompson

Since moving back to Seattle in 2002 after 10 years in New York City, Matt Jorgensen has been active in all aspects of the Seattle jazz scene. He has recorded four CD ’s with his group Matt Jorgensen +451 for Origin Records, and has toured extensively from New York to LA and in 2003 picked up an award for “Best Acoustic Jazz Group” by Earshot Jazz.

As a sideman he is frequently called on by an impressive list of musicians including Peter Bernstein, Eric Alexander, Bill Mays, Vincent Herring, George Colligan, Reggie Workman, Tim Ries, Chuck Leavell and others.

Matt is also a founder and co-Artistic Director of the Ballard Jazz Festival and has produced jazz concerts in association with Bumbershoot and others. 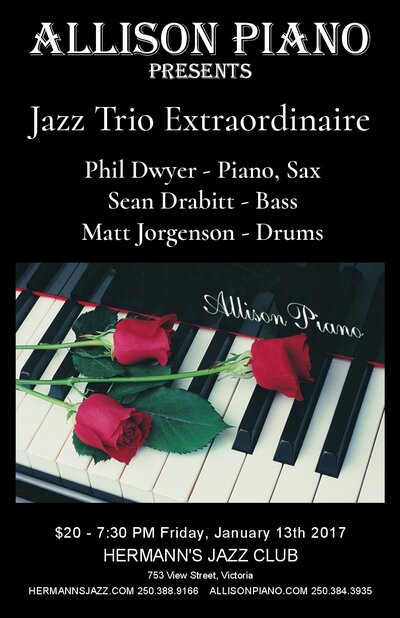