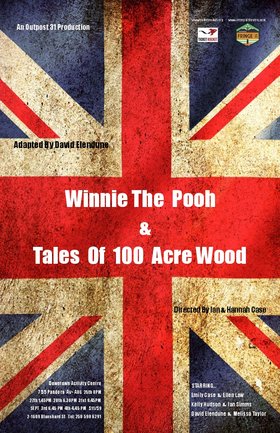 If you go down to Victoria Fringe you’re sure of a big surprise… Pooh, Rabbit, Eeyore, Piglet, Christopher Robin… And Tigger Too - Because this year a certain Canadian inspired toy bear of “little brain” celebrates his ninetieth birthday.

However, the passing of years & countless new fangled technologies have far from diminished the endearingly simplistic appeal of Winnie The Pooh, Christopher Robin and their rag-tag band of furry friends - Who, despite stumbling hilariously through numerous misadventures, somehow always miraculously manage to return home: safe & sound, just in time for tea… And honey!

With this adaptation Ian Case & David Elendune, the artistic force behind last year’s fringe hit “Ian Fleming’s Casino Royale”, have daringly chosen to juxtapose the lightness of AA Milne’s original stories against the often terrifying setting of a wartime children’s hospital deep within a London Underground station during the Nazi Christmas Blitz of 1940 – Where, unlike Father Christmas, the falling bombs care not whether you have been naughty or nice.

Be assured though, all is far from darkness… For as is befitting such a deceptively simple odyssey of body & soul, this production is truly an all-family affair: seeing Ian Case (Giggling Iguana) co-directing with his elder daughter Hannah, while Emily, his younger daughter, stars as Rabbit.

Suggested Age: 5+ Due to wartime setting.