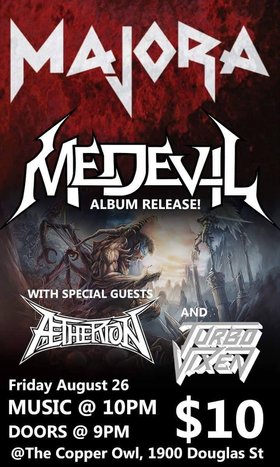 Majora is a Victoria based heavy metal band. Influenced by classic metal bands Majora has a sound unlike many modern metal bands and an attitude to match it. Open your minds and your ears and experience Majora.

'Medevil' is a Canadian heavy metal band local to Chilliwack, BC. Medevil is a highly energetic, fast-paced metal band known for their tight songwriting, intense stage presence and roaring vocals. This is their first tour celebrating the release of their debut album "Conductor Of Storms"

Comprised of four guys from all over Canada from many different backgrounds and influences but somehow aligned despite all of the odds.

Turbo Vixen are on the heavier side of rock n roll and are just a straight up good time!