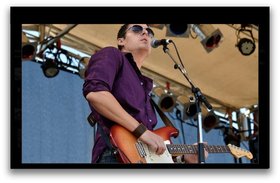 Music: Electronic / DJ, Funk / R&B, Jazz / Blues, Pop / Rock / Indie
Tickets sold at the door. Covers and originals.
Aaron Wood is originally from Montreal QC. He has been in the Victoria music scene for 6 years now. Aaron has played in every live music venue in the downtown area and has played at the Victoria Blues Bash in 2012. Aaron plays regularly every week in downtown Victoria. The first set is very volume conscious and progressively intensifies as the night goes on. The Aaron Wood band plays in the blues/rock genre with 2% funky jazz. They cover artists like SRV, Phil Collins, John Mayer, ZZ Top, Jimi Hendrix, Eric Clapton, Herbie Hancock just to name a few. There are a few original songs that are played in the show; written by Aaron Wood. It is a very electric and passionate performance, one that is appreciated by musicians and music lovers alike. Aaron has worked with some of the best musicians in town who work regularly and continues to bring on strong players to fill out the sound. Usually a bass player and drummer perform with him, making up a trio. The Aaron Wood band is always a great show, filled with musical surprises.