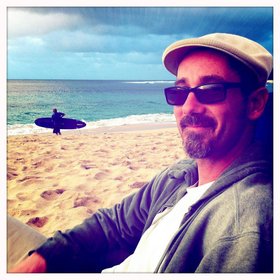 In truth, original Jamaican ska was a fusion of various musical elements that mixed together to form a sound that is instantly recognizable, yet which is most accurately one link in a chain of musical evolution has that continued forward through rock steady and reggae to modern dancehall influencing many non-Jamaican styles along the way.

In this workshop, we will investigate the pre-ska musical styles that contributed to the birth of ska music as a recognizable style in its own right."
-Chris Murray

Chris Murray is a unique force on today's music scene. Born in Toronto, he earned a strong reputation as a dynamic performer and gifted songwriter as leader of influential Canadian ska group King Apparatus. Upon the band's breakup, he relocated to Los Angeles, emerging as a solo artist with The 4-Track Adventures Of Venice Shoreline Chris, recorded... more info
Audio: Running From Safety, One Everything, Steady Beat Convention
Submit info on this show to our admins