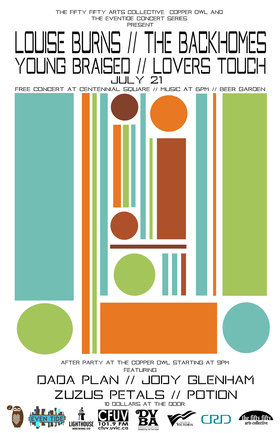 DADA PLAN
http://dadaplan.ca/
Vancouver psychedelic crooner Malcolm Biddle leads his troupe of trippers through songs about the internet and a possible dystopian future.

POTION (montreal)
http://potionn.bandcamp.com/
Members of Baked Goods, The Marlees, The Wicks and Trepanated Heads do a one off Victoria show bringing weird sounds all the way from Montreal. Check out the 3 rad tunes they have on their bandcamp.

When Brian Wilson wrote the lyric "two girls for every boy" he couldn't have known, fifty years later, how this would sum up the fate of Vancouver's Jody Glenham. With timeless craft and haunting delivery, drinking in bed has never sounded better. more info
Submit info on this show to our admins