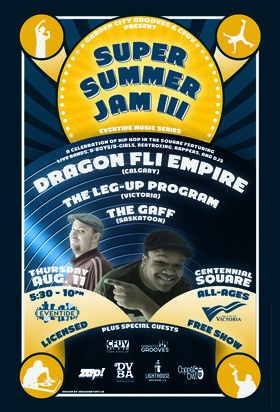 The Eventide Music Series! A free, all-ages, accessible, outdoor, multi-week series of musical performances. Eventide was developed as a partnership effort to animate Centennial Square and to support the local, emerging and diverse music scene in Victoria, BC.

Make sure to head to http://www.eventidevictoria.com for more information on the rest of the 10 FREE all-ages shows happening in Centennial Square!

Hip hop veterans Dragon Fli Empire originally garnered attention when they released a track dedicated to their experience using Calgary transit. Since then they have received accolades from the Western Canadian Music Awards when they were nominated for Best Hip Hop album in 2009 and have had the chance to tour across North America, Europe and Japan. You can check out their releases on their own independent label Makebelieve Records.

---THE LEG UP PROGRAM

Victoria’s own 17-piece collective of funk, soul, hip hop, r&b musicians will be playing during the Garden City Grooves showcase. They’re the type of group that inspires the whole crowd to get up and move. There’s no better place to enjoy a performance like that than outside in the Victoria sunshine!
http://idesignstuff.ca/thelegupprogram/
https://www.facebook.com/TheLegUpProgram/timeline

The Gaff is a life-long and renowned DJ/producer who incorporates elements of hip hop, soul and funk into his sound.
He’s been able to perform from coast to coast and always plays using vintage equipment. Make sure to make your way down to Centennial Square on August 11th to see what he calls “turntable kung fu.”