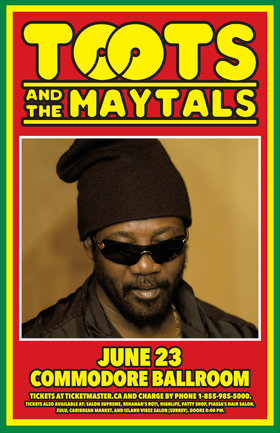 Event Archive - Toots And The Maytals

Toots Hibbert has earned the reputation as one of the greatest reggae/R&B singers of all time. Born in Maypen in the parish of Clarendon, Jamaica, Toots began singing in the church choir at the age of seven. He left home in his teens to go to Kingston where he met Raleigh Gordon and Jerry Matthias and formed the original Maytals in 1962. The band’s artistry now spans every phase of Jamaican music’s evolution, from ska through rock-steady to reggae.

Toots and the Maytals is still going strong after an incredible career including three Grammy nominations, the record for the fastest live album in recording history, and numerous gold and possibly platinum albums. The Maytals also hold the record for the largest number of number one hits in Jamaica, with 31 to their credit. The latest album, TRUE LOVE, finds Toots and the Maytals revisiting some of the band’s most classic works with a host of musical friends onboard – Keith Richards, Ben Harper, Eric Clapton, Jeff Beck, Terry Hall and the Skatalites and others.

Generations of fans – old and new – are discovering that Toots and the Maytals are masters of reggae and the live performance. Vancouver will soon witness these music legends in action.

Toots And The Maytals (Reggae/Soul/Ska/Funk)

Toots and the Maytals, originally called simply The Maytals, are considered legends of ska and reggae music. Their sound is a unique, original combination of gospel, ska, soul, reggae and rock. Frederick “Toots” Hibbert, the leader of the group, was born in May Pen in the Parish of Clarendon, Jamaica. He was the youngest of seven children. He g... more info
Audio: Fever, Sweet and Dandy, Pomp & Pride
Videos: