SUPERSUCKERS finally visit Victoria to promote their latest album "Holdij' The B...

Tickets: $22 adv. Available at Lyle's Place (on Tuesday, April 19) or immediately at: http://www.ticketweb.ca/t3/sale/SaleEventDetail?eventId=6676445&pl=rogueplanetlive&dispatch=loadSelectionData

Supersuckers are an American rock band. Following the relative success of their 1997 foray into country music with the release of Must've Been High, they have also been known to play country shows under various names, including, of course, the Supersuckers.

As of July 2012, the members are Eddie Spaghetti on bass guitar and lead vocals, "Metal" Marty Chandler and Dan "Thunder" Bolton on guitars, and Christopher "Chango" Von Streicher on drums.

Supersuckers was formed in November 1988 as The Black Supersuckers in Tucson, Arizona. The original line-up was Eddie Spaghetti on bass guitar, Dan "Thunder" Bolton and Rontrose Heathman on guitars, Dancing Eagle on drums, and Eric Martin as the lead singer. In 1989, they moved to Seattle, Washington. Here, Martin left the band. The song "Marie" was allegedly dedicated to Martin's mother after his death. The remaining members decided to continue as a four piece with Spaghetti taking over the vocalist role. They recorded numerous singles for various small labels before being signed to Sub Pop. A sampling of these are collected on the 1992 release The Songs All Sound the Same. Their first album with Sub Pop, The Smoke of Hell, was released in 1992.

In 1995, guitarist Heathman temporarily left the band. He was replaced by Rick Sims, formerly of the band the Didjits (and later the Gaza Strippers), for the recording of their third album, The Sacrilicious Sounds of the Supersuckers, and the subsequent tour. Heathman returned for the recording of their fourth album, Must've Been High, which, as their first alternative country album, was a major turning point for the band. Their fifth and final album with Sub-Pop was their greatest hits release, 1999's How the Supersuckers Became the Greatest Rock and Roll Band in the World. In the same year, they released their fifth studio album, The Evil Powers of Rock 'N' Roll. In 2001, the band formed its own record label, Mid-Fi Recordings. In addition to numerous singles and several live recordings, the band released its sixth studio album, Motherfuckers Be Trippin' on this label. Dancing Eagle then left the group and was replaced by Mike "Murderburger" Musburger, who was in turn later replaced by Scott "Scottzilla" Churilla. On tour, the Supersuckers always close their show with a "fake encore", where the band and the audience go through a 15-second pretend exit and stage entrance.

Recent years have found The Supersuckers in disarray as both their long-time manager Chris Neal and Rontrose Heathman (left in August 2009) left the band for undisclosed reasons. The band officially announced a hiatus, during which Spaghetti continued to tour and record solo. He eventually abandoned Supersucker's own Mid-Fi Records label and signed with Bloodshot Records in November 2010.[2] His new solo album, Sundowner, was released on February 15, 2011. Shortly after the album's release, Supersuckers regrouped and began touring with Thin Lizzy in Europe. This was followed by a tour of bars and clubs throughout North America with co-headliners Nashville Pussy. In 2014, the band released a new album, Get the Hell.

Supersuckers have recorded with many artists including Willie Nelson, Steve Earle, Kelley Deal of The Breeders, and Eddie Vedder of Pearl Jam. They have appeared on The Tonight Show with Jay Leno backing Willie Nelson. They have toured with numerous bands such as Mudhoney, Social Distortion, Bad Religion, The Ramones, Motörhead, Flogging Molly, Toadies, Supagroup, the Butthole Surfers, The Reverend Horton Heat, The New York Dolls, The Dwarves, White Zombie and Nashville Pussy.

The band has been involved in several charitable causes during its career, notably playing a few Farm Aid shows. But the cause they seem to promote above all others, apart from themselves, is that of the West Memphis 3. They have held a number of eBay auctions and concerts to benefit the three's legal defense fund, in addition to being involved in a benefit album entitled Free the West Memphis 3, of which Eddie Spaghetti was one of the producers.

The band also played at the VladiROCKstok '96 Music Festival in Vladivostok, Russia. According to a CBS News report, Russian fans enjoyed their hard-driving style and cowboy hats, while the festival supported Friends of the Earth and a local children's fund. According to lore, the heavy police presence and temporary stage barriers inspired their song "Barricade".

In the late 1990s, a "Supersuckers fan collective" organized a pair of tribute CDs (covers of Supersuckers songs performed by underground bands from around the globe) benefiting the West Memphis 3. These titles were "The Fans All Sound Insane" and "Song in the Key of E-vil".

ROGUE PLANET is a concert promotion company that p...
Victoria BC
Open / Operational 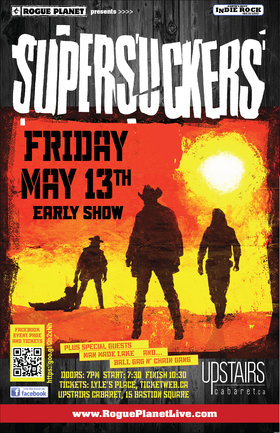