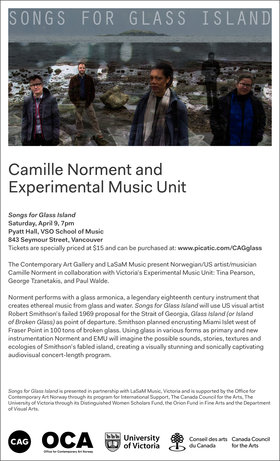 Norment performs with a glass armonica, a legendary eighteenth century instrument that creates ethereal music from glass and water. Combined with EMU’s reputation for sonic investigations of relationships between the natural world, sound and music, and between notation, improvisation and attention states in music making, Norment and EMU will develop a work that resonates with local history.

'Songs for Glass Island' will use US visual artist Robert Smithson’s failed 1969 proposal for the Strait of Georgia, 'Glass Island (or Island of Broken Glass)' as point of departure. Granted permission by the Canadian Government, Smithson planned encrusting Miami Islet west of Fraser Point in 100 tons of broken glass. However, as public pressure against the idea mounted from environmentalists and anti-Americanists, it was suspended by a governmental telegram. Aside from drawings, letters, and plans, the only physical artifacts which remain are studies which Smithson called “maps.” What would have been Smithson’s first “permanent” earthwork morphed via the idea’s failure into the famous Spiral Jetty made the following year.