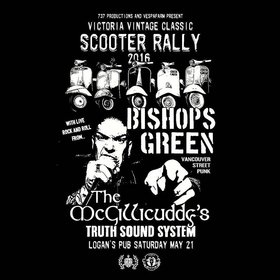 Music: Folk / Celtic / Latin / World, Folk / Celtic / Latin / World, Jazz / Blues, Jazz / Blues, Punk / Metal / Hardcore, Punk / Metal / Hardcore, Reggae / Ska / Dub, Reggae / Ska / Dub
737 Productions and VespaFarm are proud to announce the return of Bishops Green from Vancouver. It's been nearly two years and a whole new record since they've graced the stage at Logan's. Since then, they've travelled Europe a few times over and played festivals such as Punk Rock Bowling, Rebellion Fest, Pirates Press 10 Year Anniversary and many more. They burst through the Street Punk scene with such a ferocity that they really are Canada's biggest force to be reckoned with right now. Their new record, entitled 'A Chance To Change', came out in Spring 2015 on Rebellion Records. They feature members of past bands like Glory Stompers, Subway Thugs, The Lancasters, and Alternate Action.


Long running Victoria Celtic Punk band The McGillicuddys will be the first live act of the night. Have you ever heard Minor Threat covers on an accordian? Haha!!


Getting the crowd warmed up for the show will be my all time favourite DJ's The Truth Soundsystem. They will be spinning vinyl only and all Skinhead Reggae and Oi! classics.


So shine your boots, and strap on your braces, this is going to be a show for the ages.


There will be a VERY limited number of instore tickets available at CAVITY Curiosity Shop, and the rest online at universe.com. $17. Doors at 9.


See you at the show. Oi! or whatever.

other sites:
Bishops Green is a melodic, hard-hitting street-punk band from Vancouver, Canada. The group draws creative influence from the early 80′s punk rock and European Oi! scenes. Bands like Blitz, Stiff Little Fingers, Cock Sparrer and Minor Threat. Formed in the spring of 2011 [although the roots of band reach back to the late 1990's] Bishops Green ... more info

Dedicated to bringing Victoria the very best in early Jamaican reggae and soul from all over. Strictly vinyl. Selector Soul Scorcher and Edumacator of the group also founded Garden City Soul Club which still happens on the third Saturday of every month in Victoria. It is now Victoria's longest running soul dance monthly. more info
Submit info on this show to our admins