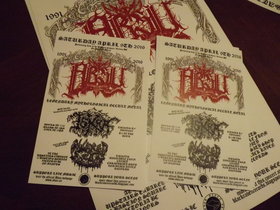 This is a must see show for Victoria!

other sites: myspace
Absu is an American extreme metal band from Dallas, Texas.[1] Their demos and first album leaned towards death metal, but evolved more towards a black metal and thrash metal which includes elements of celtic music and folk music (and later, elements of jazz fusion, progressive rock and psychedelic music) which the band calls "Mythological Occult Me... more info