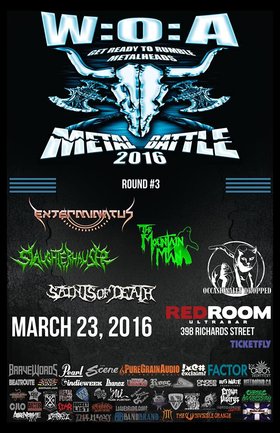 Come join us to watch Vancouver's finest up and coming metal bands duke it out for the grand prize! The overall Vancouver winner will go on to compete in the national competition in Ontario, and possibly all the way to Wacken Open Air!

The Mountain Man is a metal band from a small suburb just outside of Vancouver. Founded on bone crushing riffs, in your face stage performances, and an infatuation with plaid jackets. Probably your mothers favourite band. more info

Bringing Thrash back to the masses. Crawling out of Mission British Columbia. These boys bring a certain high energy live show that is unmatched. Loud, fast and heavy. Are you down with the HAUSER? more info

SAINTS of DEATH is a four piece, two bass guitar, Death Metal Groove Rock Band from Vancouver, Canada. Their unique heavy sound comes from: TWAN HOLLIDAY ON 8 STRING BASS & LEAD VOCALS: With his ten miles of gravel road for vocals Twan is no stranger to the stage or Big screen. He has worked with big name stars on TV & Movies, and at nearly ... more info
Submit info on this show to our admins