Jazz at the Gallery: Roy Styffe

Jazz at the Gallery: Roy Styffe

U-JAM was formed in 2005 as a community based group offer support to the musicia...
190 Sunny Lane Victoria BC
Open / Operational

–Jazz at the Gallery – 2016
Jazz returns to the Spencer Mansion for a 7th Year! The U-JAM Society is pleased to partner with the Art Gallery of Greater Victoria to present outstanding west coast musicians in a series of Sunday afternoon concerts. Presenting jazz in an intimate, acoustic setting, allowing the audience the opportunity to “sit in” with the musicians, joining them in a dialogue about the music and the musicians who create it.


Sunday, January 31st 2:00 p.m. – ”The Sound” – Roy Styffe and Friends play the music of Stan Getz
Starting in January, we will visit the music of saxophonist Stan Getz, interpreted by Roy Styffe and Friends, including Steve MacDonald on guitar and Ross MacDonald on bass.
More than most other jazz instruments, tone created on a tenor saxophone varies considerably with the combination of the player’s physiology, air pressure, embouchure, reed, and mouthpiece. In the case of Getz, his sound is immediately identifiable. In contrast with most other players of his vintage who have more edge to their tone, he emulated his idol Lester Young, creating a smooth, silky sound on the tenor saxophone that became his trademark
While only playing his first notes on a sax in 1940 at age 13, he was touring with Jack Teagarden’s Band a year and a half later. Stints with Stan Kenton , Jimmy Dorsey, Benny Goodman, and Woody Herman followed, along with gigs with Jazz at the Philharmonic with Norman Granz, and subsequent recordings with Gerry Mulligan, Oscar Peterson, Chet Baker, and numerous other jazz pioneers. He eschewed the modal approach approach taken by artists such as John Coltrane, preferring a chordal approach to his music.
Getz best explained his gift: "It's like a language. You learn the alphabet, which are the scales. You learn the sentences, which are the chords, and then you talk extemporaneously with the horn… musically, I love to talk off the top of my head. And that's what jazz music is all about."
In 1961 he was introduced to the music of South America by guitarist Charlie Byrd, who had done a state tour in 1961 and collected recordings from Venezuela, Peru, Chile, Paraguay, and Brazil. Convinced that this music needed to be heard, he persuaded producer Crede Taylor to record an album of Brazilian Boss Nova songs, introducing the world to Antonio Carlos Jobim, Louis Bonfa, and Astrud and Joao Gilberto, popularizing songs including Girl From Ipanema, Desifinado, and Corcovado.
He continued to evolve musically as the decades passed, working on new projects with Kenny Baron, Chick Corea, Gary Burton, and Bill Evans, to name a few.
Interpreting Getz’s music and helping us to understand the story he told falls to saxophonist, Roy Styffe. Roy’s roots include studies at Humber College in Toronto, and evolving as a mainstay in the Canadian jazz scene for over 25 years performing on sax, flute, and clarinet. Recording and performance credits include performing with Pat LaBarbera, Ed Bickert, Kenny Wheeler, Don Thompson, Bernie Senensky and Ron Collier, including two albums as leader. A move to the west coast, first to Vancouver and then Victoria has expanded his fan base and reputation on the west coast.
Joining Roy are fellow Naden Band members Steve MacDonald on guitar and Ross McDonald on bass. Hailing from Charlottetown, P.E.I., Ross holds a degree from McGill University with performance credits around the world as a professional musician. Steve cut his teeth gigging in Halifax in a variety of different settings from avant garde to afro-cuban with some classical and musical theatre mixed in.

Concerts are held at the Art Gallery of Greater Victoria on special Sunday afternoons, from January through April 2015. Individual tickets, including admission to the Gallery’s exhibits, are $35, with discounts available for AGGV and U-JAM members. Series subscriptions, including best seats in the house, are only $120 ($100 for U-JAM and AGGV members). Tickets and information are available through the Gallery by calling 250-384-4171 ext 1. 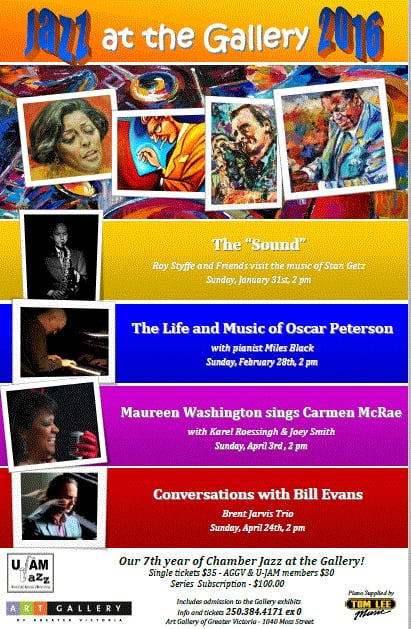