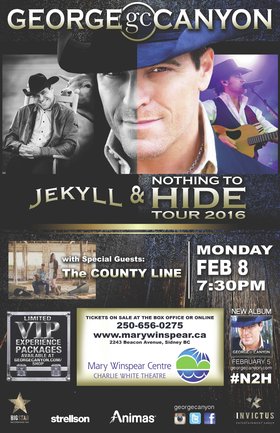 Event Archive - Jekyll and Nothing to Hide Tour: George Canyon, The County Line

Music: Country / Bluegrass / Rockabilly, Country / Bluegrass / Rockabilly, Pop / Rock / Indie, Pop / Rock / Indie
Canadian country legend and multiple JUNO Award winner George Canyon announced today the February 5th release of his eagerly anticipated forthcoming album “I Got This” via ole red dot. With the title track and first single already at radio, Canyon will embark on a multi-city, cross-Canada tour in support of the album – sharing new music with his faithful fans as well as classic crowd favourites. The “Jekyll and Nothing to Hide” tour kicks off in Calgary, AB on February 5th and will make stops from coast-to-coast, including Regina, Winnipeg, London, Moncton, PEI, Quebec, and more. Additional dates in select cities will be announced soon.

An exceptional role model and mentor – highly praised for supporting Canadian artists, Canyon has confirmed that he will employ local support in each city on the tour, thus furthering his humble efforts towards promoting and nurturing local talent. Limited VIP packages are available at georgecanyon.com/shop for each market.

“I Got This” marks Canyon’s eleventh full-length release in a career that spans nearly two decades and includes his PLATINUM debut “One Good Friend”, along with several GOLD-certified albums, including “Classics”, “Somebody Wrote Love” and the Richard Marx produced “Better Be Home Soon”. With nearly 400,000 albums sold worldwide, multiple major acting roles on television, and the 2015 launch of his radio show “Down East Country with George Canyon”, the singer-songwriter has cemented his status as a bona fide multi-faceted artist and performer.

A Nova Scotia native, Canyon was recently inducted into the Nova Scotia Country Music Hall of Fame and has been widely decorated with a number of accolades including multiple CCMA and ECMA Awards in addition to his multiple JUNO Award wins. As the national spokesperson for the Juvenile Diabetes Research Foundation and a vocal advocate and supporter of the Canadian Military, Canyon was also presented with the CCMA “Humanitarian of the Year” Award in recognition of his philanthropic endeavours with both organizations.

George Canyon had just about given up on a country music singing career when he auditioned for Nashville Star. Placing second in the 2004 talent search, the rugged, personable Nova Scotian has since had good reason to be glad he stuck it out. After fourteen years of playing music in one form or another, and releasing two self-produced albums, G... more info

A 5 piece modern country band, playing all over Vancouver island and the mainland. Sunfest performers. Over 500 shows played since 2014. more info
Submit info on this show to our admins