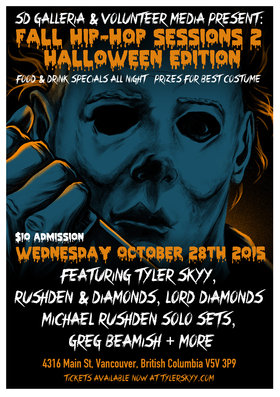 Photo's in house by

Have some wings and beers and support local talent! MSG [email protected] if you would also like to perform at the event!

BE A GHOST, A SPONGEBOB, A DRACULA, A CAT, A ZOMBIE, A PUSHEEN, WHATEVER YOU FEEL IS BEST YALL

WE ARE BACK IN THIS BIZITCH WITH ANOTHER NOT TO BE MISSED ULTRA RARE HIP-HOP EXPERIENCE, THIS TIME IT'S GOING DOWN AT THE SD-GALLERIA AKA SIMPLY DELICIOUS AKA GET YOUR ASS TO MAIN STREET ON WEDNESDAY OCTOBER 28TH!!!!!!!!!!!!!!!!!!!!

TYLER SKYY - ABOUT
Tyler Skyy is a young feel-good, love-spreading artist. He has had multiple heart surgeries and strives to spread nothing but positive vibes. For a full bio and much more, visit http://www.tylerskyy.com/

GREG BEAMISH - ABOUT
Greg Beamish is here for a good time.
The Canadian rapper has spent the past year piling up the kind of bucket-list experiences most budding MCs would trade their gold teeth for: playing shows with Ghostface Killah, Redman and Action Bronson, touring across Canada, Europe and Asia as well as collaborating with Juno-winning west coast legend Moka Only. Brilliant as all that was, shit got truly get crazy when he hit the stage at this year's NXNE 2015 in Toronto, Canada!
When Greg Beamish throws it down for his city, he goes all in. Judging by the bars slung throughout the Vancouver rapper’s latest release, the MC is pumping his extra cash into local business by packing his rolling papers with the finest B.C. bud.

AT THE FLYEZT SPOT WITH SUSHI AND MUSIC ON MAIN!!

Starting off their careers as young protégés to the legendary hip-hop producer Kutmasta Kurt, Rushden & Diamonds first got their start writing rhymes and making beats while digging in the crates of 1980's R&B and classical music. The duo’s early productions would eventually make their way onto Rushden & Diamonds' debut release “2010”, a cri... more info
Submit info on this show to our admins