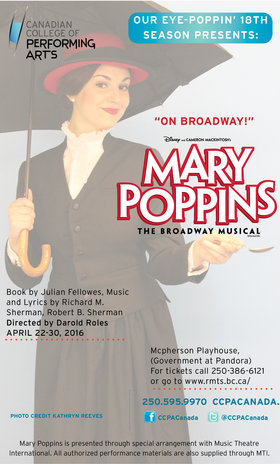 When: April 22-30, 2016 Where: McPherson Playhouse Tickets: Available through the McPherson Box Office

“Mary Poppins” is the story of the Banks family who live in London. When a mysterious young woman named Mary Poppins appears at their doorstep, the family finds that she’s the answer to their prayers, but in the most peculiar way. This family favourite takes the stage with well-loved songs, dance and even flying! “We have enlisted the services of Flying by Foy in order to give the Victoria audiences a unique Broadway theatre experience”, says Roles.

Using a combination of magic and common sense, Mary Poppins must teach the family how to value each other again. She takes the children on many magical and memorable adventures, but Jane and Michael aren't the only ones she has a profound effect upon. Even grown-ups can learn a lesson or two from the nanny who advises that "Anything can happen if you let it."

With memorable songs such as Chim-Chim-Cheree, supercalifragilisticexpialidocious and Feed the Birds, this show is a perfect opportunity to showcase top calibre Canadian emerging performers who train at Victoria’s Canadian College of Performing Arts.