The Ministry of Casual Living

The Ministry of Casual Living (All Ages)

Concert blurb:
Join Craig Pedersen on his CUT AND GOUGE solo-trumpet cross-Canada CD-release tour on Friday, December 18th at the Ministry of Casual Living. At each stop of the tour he’ll be playing with some of the musicians he loves - in this case, Night Tide (Soma Morse), General Gruff (Adam Cantor) and the Friedman/Krause duo and with his project The Sound of the Mountain with Montréal’s Elizabeth Millar.. More information about the tour and the new disc at http://www.craigpedersen.com

The Sound of the Mountain:
https://soundcloud.com/craig-pedersen/sound-of-the-mountain

The Sound of the Mountain is Elizabeth Millar and Craig Pedersen. Playing amplified clarinet and trumpet, they fill rooms with sounds of breath, wind, wood and metal, creating an intimate noise. They perform long pieces often spanning 30-40 minutes, which take their audience through a rich and rewarding sound experience. They are recently returned from concerts in Australia and South-East Asia and are currently working on their first recording to be released in early 2016. Elizabeth Millar is currently studying a music performance major in Fine Arts at Concordia University with world-renowned contemporary and improvising clarinettist Lori Freedman. Elizabeth is an active improviser in Montreal and has performed across Canada and internationally in Australia and South-East Asia. She continues to develop an innovative and unorthodox approach to her instrument and to her performance art practice.

Nathan Friedman is a clarinetist and composer currently based in Victoria, BC. He studied composition and experimental music at Wesleyan University and UVic and has improvised with Anthony Braxton, Gino Robair, François Houle, Joëlle Léandre, Mats Gustafsson, Nicole Mitchell, Wayne Horvitz and Taylor Ho Bynum. He is currently a member of the Victoria Composers Collective, the Friedman/Krause Duo, A Place to Listen Ensemble and The Swinging Pendulums.

Shane Krause is an improvising baritone saxophonist and clarinetist (Eb, Bb, and Bass Clarinets). Shane’s focus is on improvised music but he also has a performs music from the jazz and classical spectrums, including jazz, free jazz, chamber music, new music and common practice classical music.

Sound of the Mountain 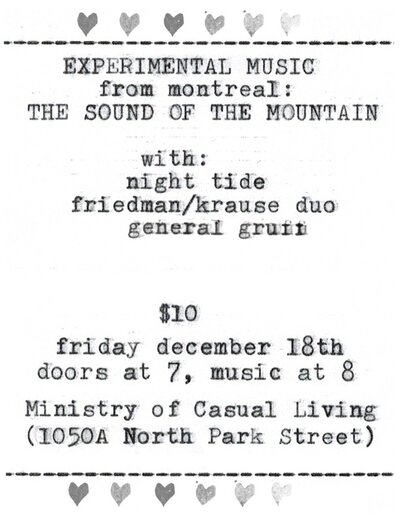