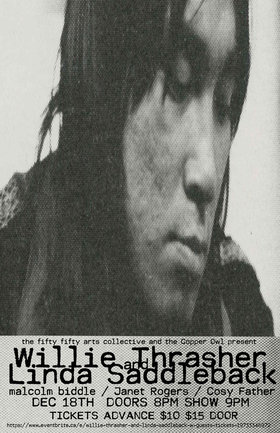 WILLIE THRASHER and LINDA SADDLEBACK
https://en.wikipedia.org/wiki/Willie_Thrasher
http://lightintheattic.net/releases/2004-spirit-child
Willie's back and in a big way! Last years compilation release by Light in the Attic Records entitled Native North America Vol.1 featured 3 of his tracks from the recently reissued LP Spirit Child. Spirit Child has been tearing up the charts locally on CFUV and across Canada.

"Willie Thrasher is an Inuk singer-songwriter from Aklavik, Northwest Territories. At five, Thrasher was taken from his family and sent to a residential school where he was forbidden to practice his Inuvialuit culture. In the mid-1960s, he drummed for the Cordells, one of the first Inuit rock bands. One evening, a stranger recommended that the group tap into their Aboriginal roots instead of the charts for inspiration. This prompted Thrasher to write songs about his life, people, and the environment (as heard on 1981’s Spirit Child LP, CBC). Thrasher currently performs with his partner Linda Saddleback . He is a trailblazing troubadour with an Indigenous heartbeat sound." http://levitation-vancouver.com/artist/willie-thrasher-linda-saddlebeck/

MALCOLM BIDDLE
https://kingfisherbluez.bandcamp.com/album/a-dada-plan-is-free
http://dadaplan.ca/
Malcolm fronts Vancouver psych/folk group Dada Plan but has also made a name for himself as a solo musician and former frontman for Vancouver psych/rock band Capital 6. Malcolm will be soothing our ears with his brand of psychedelia infused dystopian folk.

COSY FATHER
https://cosyfather.bandcamp.com/
https://www.facebook.com/CosyFather/
"Draped in soft timbres and the gentle whisper of time speaking with itself, Cosy Father pulls gently at the frayed fibers of wool blankets knitted by aged and calloused hands. Its dusty affectations slip through the cracks between attic floorboards, salting the cyclic impressions of footprints embedded in the freckled ground below. These are minimalist lamentations for the close-cornered conversations between past personages astrally projected into syntax. The verses rain down from the cumulous wordcloud of Elizabeth McArthur, as she delivers parables of that which goes on and on. And it is here, at this delicate juncture of pastism dredged from the depths of poignant recollection, that Loser Birds exists as a remedy for sorrowful remembrances and sleepless nights of the phantom phrasings, fleeting footsteps on solemn shores." https://weirdcanada.com/2014/04/new-canadiana-cosy-father-loser-birds/

Kevin Sipreano Howe will be spinning tunes in between bands!

Cosy Father is a reclusive hillbilly with the voice of a young woman who writes, sings, records and weaves dreams in a small room in Victoria, BC. more info
Audio: Burn My Bones

Janet is a Mohawk/Tuscarora writer from the Six Nations band in southern Ontario. She was born in Vancouver, British Columbia and has been living on the traditional lands of the Coast Salish people (Victoria, BC) since 1994. Janet works in the genres of poetry, spoken word performance poetry, video poetry and recorded poetry with music and script w... more info
Videos: 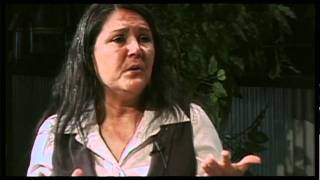