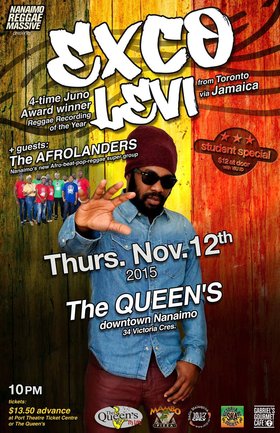 Music: Reggae / Ska / Dub
Exco Levi is a Toronto-based reggae musician who grew up in Jamaica. He has won four consecutive Juno Awards for Reggae Recording of the Year from 2012 - 2015. While a top reggae name in Canada, Exco has also gained notoriety in Europe and the Caribbean, having been featured on the line up of Jamaica's renowed Rebel Salute festival in January 2015.

Levi's Nanaimo performance will be his debut on Vancouver Island. While in the region he will also be performing in Victoria on Friday, November 13th and in Cumberland on Saturday, November 14th.

AFROLANDERS is Nanaimo's new Afrobeat, pop, and reggae. super group. The band is comprised of Vancouver Islanders who hail orginally from various African and Caribbean countries and share a love for playing music and getting people dancing.

Exco Levi, was born Wayne Ford Levy on June 7, 1981 in Manchester and grew up in Clarendon, Jamaica. Singing is in Wayne’s blood as his father was also an artist and sound system DJ. Exco’s musical tastes include listening to and appreciating the lyricism and talent of the late Garnet Silk, Bob Marley and Peter Tosh as well as contemporaries... more info
Submit info on this show to our admins