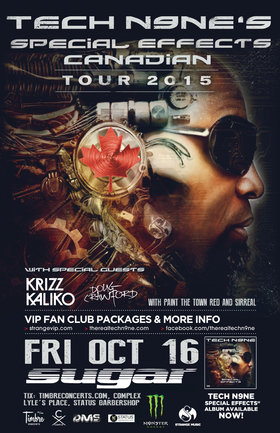 While crafting what would be one of the most important albums of his career, Tech N9ne thought back to some of his early material. Before Strange Music became the No. 1 independent rap music label, the Kansas City rapper released The Calm Before The Storm. The acclaimed collection included songs that hinted at the type of artist he would become, fr... more info

Born in Kansas City, MO., KRIZZ KALIKO was raised by a mom who spoon-fed him music. As an opera and gospel singer, as well as being the choir director of their church, his mother sang to him and, fortunately, made him sing with his sisters. He performed in the choir all throughout his early teens and his mom often treated the family to live concert... more info
Submit info on this show to our admins