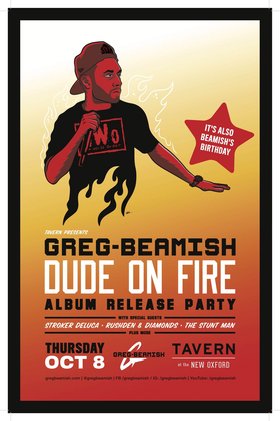 Tavern at The New Oxford Presents:

The Stunt Man & Christian Flores on the wheels.

WURR BACK THIS YEAR 4 ANOTHER HOT AZZ ALBUM RELEASE PARTY AT THE TAVERN!

Coming off a broken leg didn't stop (me) Greg Beamish from hitting the road across Europe this year, performing shows in Germany and Switzerland while also being a featured artist at NXNE 2015. Catch my last show in Vancouver before I fly to Toronto a few days later to perform an official showcase at Canadian Indie Music Week 2015. Wahoo!

Come celebrate this amazing accomplishment (LOL) alongside some of Vancouver's finest talent like Stroker, Stunt Man, Michael Rushden, Lord Diamonds, Christian Flores, and me!
at The Tavern, on my birthday, that's right...

AT THE FLYEZT SPOT IN YALETOWN!

Starting off their careers as young protégés to the legendary hip-hop producer Kutmasta Kurt, Rushden & Diamonds first got their start writing rhymes and making beats while digging in the crates of 1980's R&B and classical music. The duo’s early productions would eventually make their way onto Rushden & Diamonds' debut release “2010”, a cri... more info
Submit info on this show to our admins