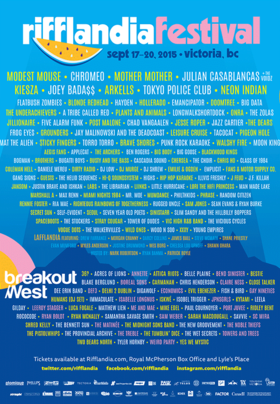 This year, BreakOut West showcases will be interwoven with Rifflandia Festival‘s programming, bringing together the strengths of both events over one amazing weekend in Victoria.

TWO GREAT FESTIVALS WITH ONE WRISTBAND
Rifflandia wristbands allow access to Rifflandia performances and BreakOut West festival showcases.
(subject to age limit and capacity restrictions, all tickets must be exchanged for wristbands, see Rifflandia.com for details).

Tickets are available online at Rifflandia.com, or in person at Lyle’s Place and The Royal McPherson Box Office.

If you've ever read a comic book, watched a science fiction movie, played freeze tag, or undertaken a top-secret intergalactic space mission, then you know all about the value of a good force field. Tokyo Police Club surely do, and in the four years since the band's last album, our brave heroes from Toronto spent several long winters and many manic... more info

Neon Indian is the brainchild of Alan Palomo, who's 2009 debut record Psychic Chasms not only earned the 20 year-old a spot on numerous year-end lists, but assisted the forming of a genre that, though known by a few names now (hypnagogic pop, glo-fi, chillwave), summoned a very unique and specific electro-mangled sound. Pitchfork, Rolling Stone, an... more info

Big Data is a paranoid electronic music project from the Internet, formed out of a general distrust for technology and The Cloud (despite a growing dependence on them). Helmed by producer, Alan Wilkis, Big Data aims to explore the relationship between man and machine, and how the internet has reshaped the human experience. more info

other sites: lastfm
After debuting with Tic Toc Tic in 2009, The Zolas scaled the precipice of cult status across Canada, thanks to a loyal fanbase carried over from Zach Gray (vocals, guitar) and Tom Dobrzanski’s (piano) earlier years as Lotus Child. With Ancient Mars, their second album, The Zolas are set to continue their legacy of postmodern pop. Armed with p... more info