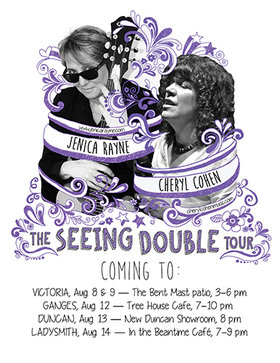 Folk-rock artist JENICA RAYNE of Kingston, ON is celebrating the release of her fourth CD, Hit the Ground Running. Rayne's song "Faster" drove her into the regional finals of the 2015 CBC Searchlight talent contest.

CHERYL COHEN lives on Salt Spring Island, but recorded her debut album Love & Exile in Nanaimo. It has a bluesy world music feel and the "Exile" songs relate to the fact that she grew up in apartheid South Africa, then left at age 22.

Note that the songs aren't all serious — flashes of humour may be experienced!