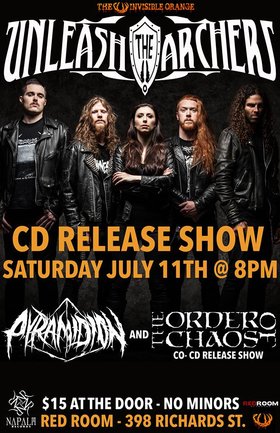 The Order of Chaos, who will be releasing their brand new album 'Apocalypse Moon' as well! Listen to the first single here:
https://www.youtube.com/watch?v=HIP9Ba4qFT8

Pyramidion, Vancouver's very own super-band made up of the best of the city's talents; a face-melting death metal powerhouse with members from Over The Coals, Tribune, Between Lives and Nylithia.

other sites: bigcartel | unleashthearchers
Unleash The Archers have been on the road since their inception in 2007, and subsequently created an immensely loyal North American fanbase. The success of their sophomore album brought them overseas to the ears of European metalheads, and now they are slowly infiltrating the South-American and Asian markets with their genre-defying brand of music.... more info
Audio: Dreamcrusher Demo, Upon Ashen Wings, The Filth And The Fable
Articles: Testing Metal with Grant Truesdell of Unleash the Archers
Submit info on this show to our admins