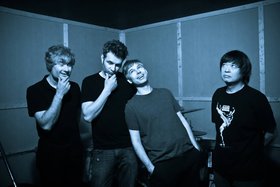 The 10-week long series will feature both local and touring bands every Thursday from July 2-September 3, 2015 from 5-9pm. All shows will take place at Centennial Square in downtown Victoria, are completely FREE, all ages and will have a beer garden and food trucks.

Thurs September 3rd is presented by the wonderful folks at LA-TI-DA RECORDS!

BUM are an alternative, power punk band from Victoria BC who got their start in the early 90’s but have recently reunited to full form.

Victoria-based, RADco (The Red Arrow Drilling Company), are a garage, psych pop band made up of a collection of people far too nice for Rock & Roll.

ACAB Rocky is a noise/indie rock project with folk influences from Victoria BC. The two current members, Sam Wells- vocals/guitar and Oliver Hollingshead- drums, have released two EP's, "disgusting" and "orchard", as well as their recent full length "sara". more info
Submit info on this show to our admins