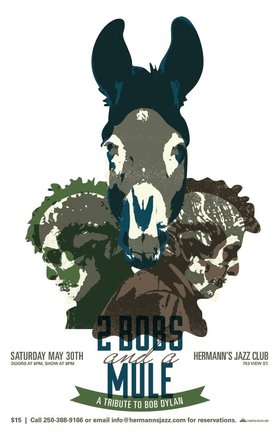 Lucky Budd began gathering musical friends in 2000 to pay tribute to and sing the songs of Bob Dylan under the name 'Two Bobs and a Mule.' What began as a couple of guys with acoustic guitars and a list of favorites tunes has blossomed into an annual concert event. The friends have grown into a roots-rock band made of well known Victoria musicians over the last 15 years. The band is eager to cover late 60's anthems and post-'comeback' material, as well as create unique arrangements of early acoustic material. They are particularly fond of scattering hidden gems around the two sets of music from America's greatest songwriter!

Tickets available:
by emailing [email protected] and making a TICKET
RESERVATION. Include your full name, phone number, how many tickets you would like and for what show. Doors open at 6pm and food and drink is served until the end of the show.

Since 1999, Two Bobs and a Mule have been playing Logan's on or around Bob's Birthday every year. Electric and Acoustic Dylan. A favorite of Victoria's Bob Dylan Appreciation Society. more info
Submit info on this show to our admins