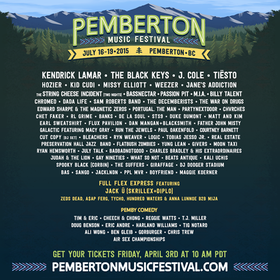 California, it wasn't long before 23 year-old Kendrick Lamar, formerly known as K. Dot, would become acquainted with the harsh realities of the world. Sheltered by no means, the emcee was exposed to a lifestyle commonly adopted in the inner city. However, this exposure didn't influence his character in a way that on-lookers would expect. WIth the w... more info

Raised by his mother in North Carolina, J. Cole's hometown of Fayetteville would provide much of the sights and experiences that would come to shape his sound. Cole fell into rapping at the age of 12 when his cousin from Louisiana spent the summer in Fayetteville, showing him the basics of rhyming. He was instantly hooked. From there he delved deep... more info

Punk rock inspired countless artists over the years, so isn't it time for a band to bring that inspiration back around? Blistering with energy, Billy Talent captures the spirit, attitude, and explosiveness that first launched rock's rebel cause. Though they describe themselves as a "walking, talking Seinfeld episode," the group musically captures a... more info

Imagine, if you will, a yacht. It's forged of gold and strong African teak, bobbing gently at anchor somewhere between the French Riviera and Detroit. A statue of the late Roger Troutman is affixed to the stern like a guardian angel. The ladies of Klymaxx wander the decks serving strawberries and cream on silver platters. Sylvester himself is the s... more info
Audio: Night By Night

Roberts formed the band that was eventually known as William in 1993. The band's name was changed to Northstar in 1996. Although the band gained some notice in independent rock circles, they couldn't break through to a national audience, and broke up in 1999 after failing to release an album.[1] Roberts' bandmate George Donoso went on to significan... more info

Edward Sharpe and the Magnetic Zeros

Edward Sharpe and the Magnetic Zeros is a band that was formed by Alex Ebert, vocalist of Ima Robot. Their first full-length recording, Up from Below, was released July 7 2009 digitally and July 14 2009 physically, on Vagrant Records. Their first show as a full band was played July 18, 2007 at the Troubadour in West Hollywood, California. more info
Submit info on this show to our admins