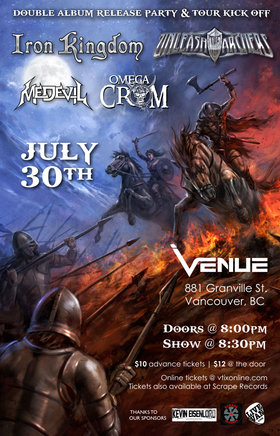 Music: Punk / Metal / Hardcore
IRON KINGDOM kicks off their North American Tour of 2015 in Vancouver, We will be releasing the two upcoming albums, 'UNLEASHED AT THE KRAKEN (LIVE IN SEATTLE)' as well as our 3rd full length album 'Ride For Glory'

ADVANCE TIX Now Available at SCRAPE Records, as well as through any band member of IRON KINGDOM

other sites: bigcartel | unleashthearchers
Unleash The Archers have been on the road since their inception in 2007, and subsequently created an immensely loyal North American fanbase. The success of their sophomore album brought them overseas to the ears of European metalheads, and now they are slowly infiltrating the South-American and Asian markets with their genre-defying brand of music.... more info
Audio: Dreamcrusher Demo, Upon Ashen Wings, The Filth And The Fable
Articles: Testing Metal with Grant Truesdell of Unleash the Archers

Inspired by legendary pillars of heavy metal such as Iron Maiden, Judas Priest, The Scorpions, and Rush, this four-piece is well known for their energetic and electrifying stage presence, as well as intricate musical melodies that bring listeners back to a time when heavy metal was in its prime. Formed in Surrey, B.C. Canada, in June of 2011, th... more info

Medevil is a highly energetic, fast-paced metal band known for their tight songwriting, intense stage presence and roaring vocals. They are one of the few metal bands coming out of Chilliwack BC, and hold that title proud as they have earned much praise and respect since their inception in 2014. As one of the 6 finalists of the Wacken Metal Battle ... more info
Audio: A Sacrifice (Demo)
Articles: SEPULTURA – 30TH Anniversary Tour (w/ Destruction, Arsis & more) Live Review and Photo Gallery, PHOTO GALLERY: WACKEN METAL BATTLE, VANCOUVER – FINAL ROUND
Submit info on this show to our admins