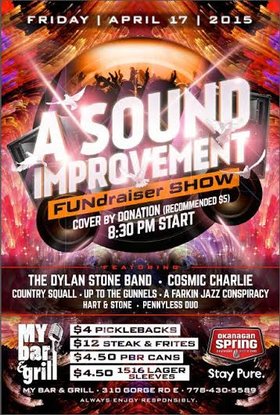 Music: Country / Bluegrass / Rockabilly, Funk / R&B, Jazz / Blues, Pop / Rock / Indie
My Bar and Grill has been honoured over the years to have so many amazing musical acts grace its stage, and believes that those bands deserve the best (or at least pretty good) Sound System!

Just by showing up to this show you will be helping us raise the funds to upgrade our speakers and PA system.

There is no cover for this show, but a suggested donation of $5

The night will feature:

Dylan Stone is an honest musician who writes, plays and sings from the heart. He’s a restless songwriter who is constantly pursuing new songs, sounds and collaborations. Raised by an old record collection, his guitar has put food on his table his entire adult life. An interesting and storied career has led him to share the stage with one of hi... more info
Videos:

Moved from the great music scene in Nanaimo, to record and play a bunch of cats out here in Victoria. Attended Malaspina's awesome Jazz Program, and had a project that pretty much has played everywhere. I'm sure it's just as healthy a scene out here! more info

Based in Victoria BC

more info
Submit info on this show to our admins