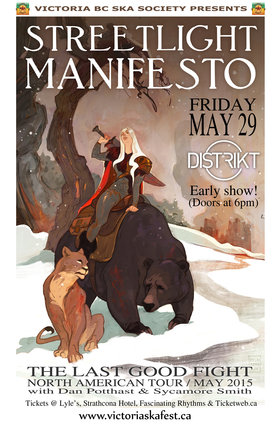 Victoria BC Ska Society is proud to announce that Streetlight Manifesto is confirmed for our On the Road to Ska Fest 2015 concert series in Victoria on Friday, May 29 at Distrikt (early show 6pm door). Dan Potthast and Sycamore Smith will open.

Tickets go on sale Friday, February 27 at 10am on ticketweb.ca and at Lyle's Place in Victoria.

This is a band that our fans have been requesting for a very long time. They're probably the biggest and most important ska/punk fusion band of the last decade, so we're thrilled to be presenting their shows.

Of all the various compliments Streetlight Manifesto have received from fans over the years, there is one in particular that seems to resonate most with the members of the band. After a show, a kid in torn jeans and a Pantera shirt, sporting ridiculous facial hair, will find one of the Streetlighters outside of the club and say hello, followed by "... more info
Submit info on this show to our admins