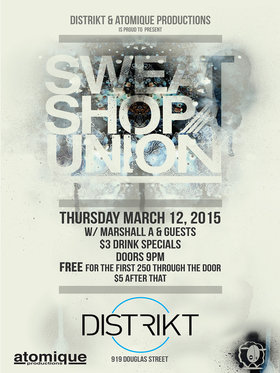 Canadian hip-hop heavyweights Sweatshop Union, one of the hardest working ensembles to ever emerge from British Columbia, have been making righteous, politically charged music for over a decade.

With tens of thousands of albums sold worldwide and hundreds of show rocked, the word of mouth is spreading about Sweatshop Union’s style of conscious lyrics, highly musical beats, and high energy live shows that far surpass the average hip hop concert. Sweatshop began as a collective of Vancouver-based artists pooling resources to release an al... more info
Submit info on this show to our admins