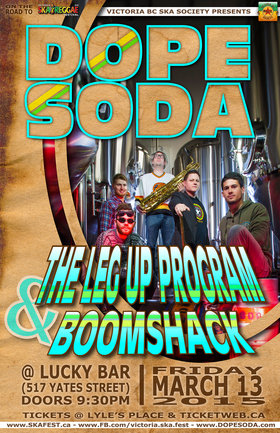 Music: Funk / R&B, Hip Hop / Rap, Jazz / Blues, Pop / Rock / Indie, Reggae / Ska / Dub
Dope Soda hail from mid Island (Nanaimo BC) and are one of the most active hard working ska/reggae bands in the province. Formed in late 2011, Dope Soda present a fresh concoction of six of the top jazz, rock, and Jamaican-music-inspired musicians from Vancouver Island, with membership in acts such as Current Swell, The Bananafish Dance Orchestra and The Kiltlifters.

The band is led by a three-piece horn section with roots in the highly-regarded Vancouver Island University Jazz Department, buoyed by a funky rhythm section that serves up sips of bubbling Hammonds and Wurlitzers, shots of distorted guitar, and heavy bass--in your face.

When you put all three bands together one after the other the sum of its parts equal a ton of fun.