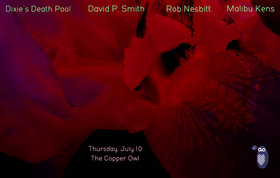 DAVID P. SMITH http://www.davidpsmithmusic.ca
DAVID P. SMITH has been pursuing his passion for C&W and western swing with the Golden Country Clan, but it's been quite a stretch since Victoria audiences have experienced his original material, a unique and charged de/reconstruction of blues and country forms. There's some woodshedding going on with drummer Sean Thompson so expect something new.

ROB NESBITT'S iconic band BUM rightfully enjoys almost legendary status in Victoria, BC and his long tenure in hardcore institution AK-47 has earned him a reputation as a dynamic performer without peer. What most of Victoria doesn't know is that Rob has been labouring on a solo project for several years. It's nearing completion and we're going to get a sneak peek of it -stripped down to the essential element....the songs - in this debut acoustic set.

David P. Smith is a multi-disciplinary artist who jumped from visual art, Dadaist performances, and slam style poetry into the Victoria (Canada) musical scene with the irreverent hillbilly punk band The Dogbreath Brothers. He is a dynamic performer and an unflinchingly original songwriter who in the past 18 years has released six full length recor... more info